Waking up to the history of alarm clocks 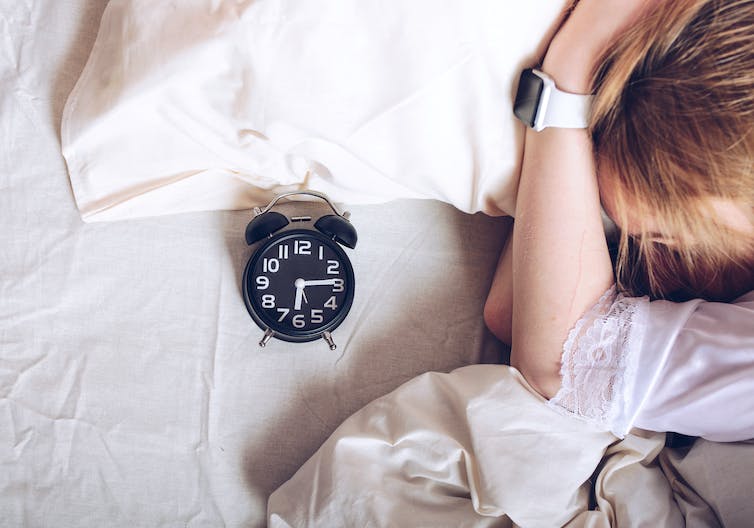 It’s the time of year when we Australians start returning to our normal rhythms. The first beats of the day are often the dreaded beeps of the alarm clock or a digital symphony from a bedside phone.

These modern electronic alarms are just the latest in a long sequence of methods used to wake us from sleep: from the watchmen on ancient city walls waiting for the dawn to more recent clocks on wheels that have to be chased to stop ringing.

The job of waking us up when our body clocks are telling us to sleep is a big ask. When did we first start using alarms, and what did they sound like? What’s changed about the sounds of time, and what hasn’t?

Some of the earliest words we have for time measurement show people’s particular interest in dividing up the different parts of the night.

In the pre-modern world, without electric lights and electric alarms, people paid more attention to the quality of light and the sounds around them. A rich vocabulary emerged in ancient languages for the different parts of the night. One early Latin word for the time before dawn was gallicinium, the time of the cock’s crow. Scientists have since discovered roosters really do know what time that is. 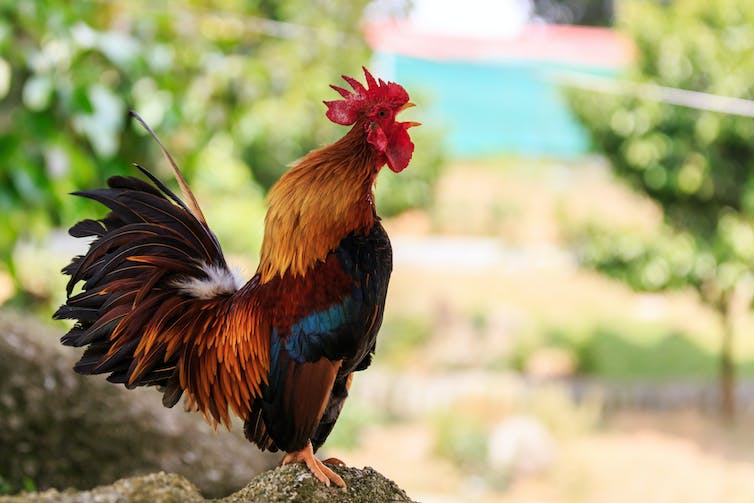 ‘Cocker-doodle-doo!’ Pre-modern night was divided into multiple segments, and the time before dawn was named for the cock’s crow. Shutterstock

Birdsong remains an important way of experiencing waking up. In Australia, we often evoke birdsong when we think about sleep and waking — from morning caroling magpies, to the versatile currawong or the midnight call of willie wagtails. Less melodic, though equally striking, is another possible bird noise associated with early rising — “sparrow’s fart” — first attested to in the 19th century.

Read more: Birdsong has inspired humans for centuries: is it music?

The human body has developed its own repertoire of alarms.

The Islamic call to prayer, the adhan, sung by men called muezzin, is one of the most sonically striking examples, with various versions marking out differences between traditions and regions. The melismatic chant — where a single syllable is sung over several musical notes — is both a wake up call to prayer (“Prayer is better than sleep”) and a prayer in itself.

Some early-morning calls were combined with weather forecasting systems. In the 15th century the town criers of the port of Sandwich on the south coast of England would call out the wind changes in the night so seafarers would know when favourable (or unfavourable) winds sprang up. Much later, in some parts of the industrial world, professional knocker-uppers might use a pea shooter or stick to tap on windows to wake you up for your shift.

Having humans wake you up would usually mean someone has to stay up all night. But how would that person know when to cry the alarm? Sundials would obviously be useless. This is one reason technologies developed to count the hours of night — ancient and medieval water clocks with markings to show how water flow corresponded to time passing, and later (from around the 14th century) sand glasses in the familiar hourglass shape. 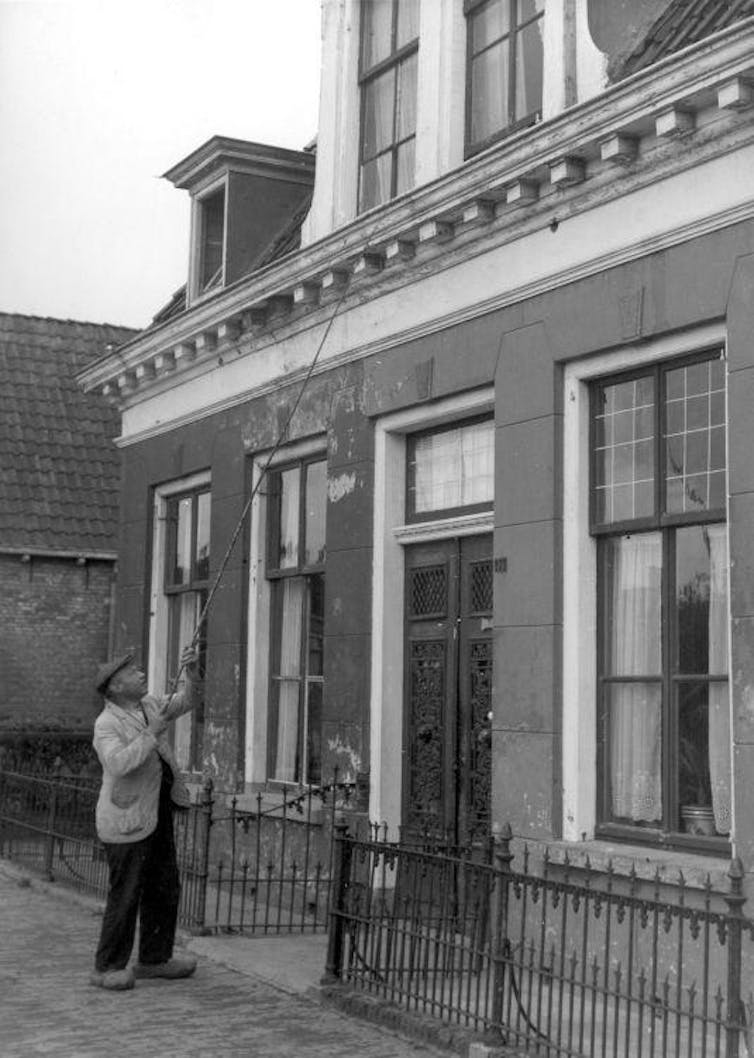 The Middle Ages saw one of our most amazing inventions — mechanical clocks, originally driven by weights. Gravity pulled suspended weights down to drive the clock mechanism. The weights were periodically wound back up for another cycle.

These clocks began as large objects in churches and town belfries. Some had elaborate automata: the extraordinary 16th-century Strasbourg clock includes a famous cockerel whose cries echo through the cathedral. Its automated rooster was a survival from an earlier clock made in the 14th century, and included as part of the new renaissance clock. 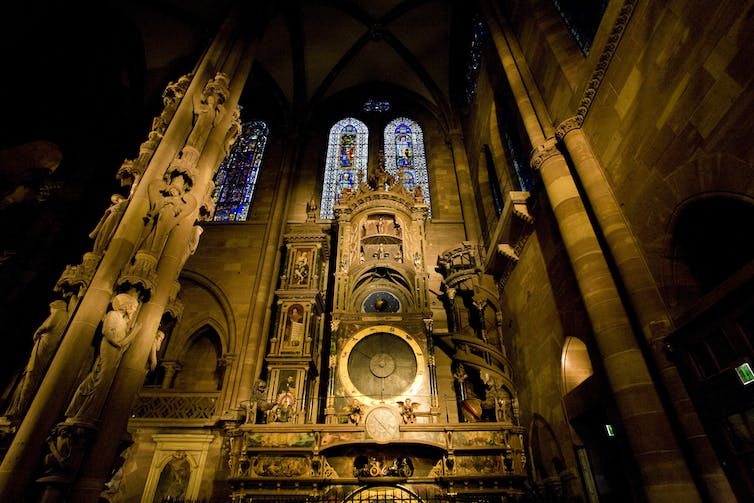 Some large clocks played music on bells before striking the hours. This year is the 700th anniversary of what may be the first such musical clock, installed in a monastery near Rouen in 1321. It played a hymn, Conditor alme siderum (Dear Creator of the Stars), for the season of Advent that starts the Christian year.

Such chimes are our first recorded mechanical music, and a precursor to today’s musical alarms. The technology was probably developed by tech-geek monks as a way of dealing with waking up to sing their prayers in the night — even better if that wake-up call, like the adhan, was a pious prayer itself.

The earliest versions of the clocks we know today were made for large communities, public spaces or courtly elites. 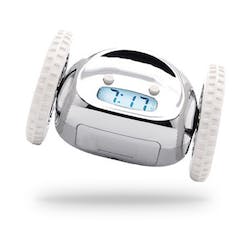 The ‘clocky’ alarm clock on wheels requires the waker to chase it. Clocky.com

Gradually though, and certainly by the mid to late 15th century, you could find heavy iron wall clocks in private houses (made in places still famous for clockmaking, such as Switzerland). These often had pins that you could place around the clock face to set the bell ringing at a particular time. These house alarm clocks could wake the owner to work and pray.

It was during this period, too, that compact spring mechanisms made smaller and smaller personal watches possible, carried or worn on the body from the 16th century.

The personalisation of time accelerated in the 19th century and gave rise to some wild modern alarm clocks. Among the more striking inventions of the French magician Jean-Eugène Robert-Houdin was a clock that lit a candle after the alarm sounded.

Read more: Morning haze: why it's time to stop hitting the snooze button

Though nothing has reached the sophistication of the breakfast-making Rube-Goldberg-style alarm clocks seen on The Goodies, automaton clock alarms have promised freshly made coffee and toast or even just their aroma. Here the familiar sounds of the kitchen, with their enticing morning smells, soften the rude awakening from sleep.

Today’s alarms, with all their invention, come as a gift (or depending on how much you enjoy waking up, a curse) from the Middle Ages to us today. 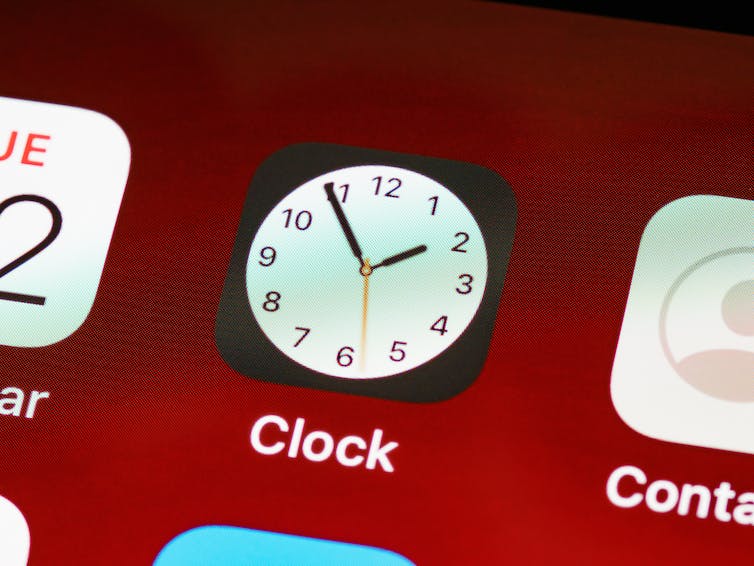 The iPhone can do a lot of things, but it cannot make toast. Brett Jordan on Unsplash, CC BY

This article is republished from The Conversation under a Creative Commons license. Read the original article.

Back to previous page

If you’ve got a question, our AskACU team has you covered. You can search FAQs, text us, email, live chat, call – whatever works for you.

Live chat with us now

Chat to our team for real-time
answers to your questions.